Whether he is performing as Tony Bennett or painting as Anthony Benedetto, he offers to the recipient of his artistry a bridge to his personal values and views of the world. He puts his emotions into his work and with that creates a strong connection that is the necessary result of any successful artistic endeavor. Tony Bennett is an artist. He is best known as a revered performer, the recipient of accolades by his peers and honors by his profession. Tony Bennett is also a visual artist, painting under his family name of Benedetto. The painter is an alter ego to the performer, living out a passion that is personal and introspective.

Ever since Anthony Benedetto, at the age of five, began drawing chalk pictures on the sidewalks of his hometown in Astoria, Queens he has had a commitment to art that has flourished. With his standing over six decades as one of the premier entertainers in the world, he finds time to paint every day, sketching the view from the windows of his hotel suite or out in the countrysides to which he travels. The United Nations has commissioned his artwork on two occasions including their 50th Anniversary "Peace" and "Brotherhood" (purchased by Oprah Winfrey for her personal collection). Three Bennett originals are part of the permanent collection of the Smithsonian Institution, including his portrait of Duke Ellington, which was recently accepted into the National Portrait Gallery. Bennett's painting honoring good friend David Hockney, "Homage to Hockney," is on permanent display at the Butler Institute of American Art in Youngstown, Ohio and his original oil painting, "Boy on Sailboat, Sydney Bay," is part of the permanent collection at the prestigious National Arts Club in Gramercy Park in Manhattan.

Central Park is one of three Benedettos in the permanent collection of the Smithsonian Institute in Washington, D.C. 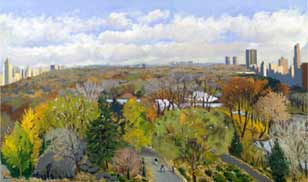 Tony Bennett began formal training as an art student at the School of Industrial Arts (now known as the School of Art and Design) in Manhattan and continued his studies with private studios and teachers throughout the years. A self-proclaimed "museum freak," he visits museums and galleries all over the world, especially during his extensive concert tours. As an artist of both worldly and familiar subjects, Tony Bennett has experimented with a wide range of subjects, has studied the intricacies of various styles, and has learned from the great masters. His body of work reflects an awareness of the history of art and the artist's continuing passion for enjoying and creating that which is universally recognized as beautiful. Common to all his work, be it the oils, watercolors or sketches, is his desire to communicate.

His work as a painter has been featured in several art publications including a cover story in ART AND ANTIQUES, ARTNEWS, INFORMART, THE ARTIST'S MAGAZINE, and INTERNATIONAL ARTIST magazine. He has also participated and exhibited his work as part of the Metropolitan Museum of Art's lecture series. Among the many owners of original Benedettos around the world are the late Cary Grant, President Bill Clinton, Carol Burnett, Whoopi Goldberg, the late Frank Sinatra, Donald Trump, Oprah Winfrey, Mickey Rooney, Katie Couric and the late Robert Rauschenberg.

Bennett was commissioned to be the official artist of the 2001 Kentucky Derby and created two original watercolors for this historic racing event ("Kickin' Up Dirt 1", "Kickin' Up Dirt 2").

Seven of Bennett's paintings have been published as museum-quality limited edition, fine-art original lithographs. The first four of the collection, "South of France," "Greek Port," "Sunday in Central Park" and "Monet's Garden" are sold out and three titles, "Wolf Trap," "Lovers in Monet's Gardens," and "Golden Pavilion," are currently available.

Most recently, in 2004 Benedetto Arts presented Tony's first giclée, "Gondola, Venice" and has since produced two additional giclées from his Italian series of paintings, "Chianti" and "Positano." With the publication of two beautifully-bound books of his paintings, "TONY BENNETT: WHAT MY HEART HAS SEEN," by Rizzoli International in 1996, and, "TONY BENNETT IN THE STUDIO: A LIFE OF ART AND MUSIC" in 2007 released by Sterling Publications, a lifelong dream has been realized.

Benedetto Arts LLC was established in 1999 and is based in New York City. The company exclusively represents and oversees all aspects of Tony Bennett's artwork including exhibitions, commissions, and all marketing, advertising and promotional activities.